How to Survive a Wild Boar Attack | All You Need to Know
by Andreea Stoica
April 23, 2020

Continuing our series of wild animal attacks, we now turn to wild boars. So, are wild boars dangerous? Are wild boar attacks common? Let’s see today how to survive a wild boar attack, prevent it, and live to tell your story of bravery and adventure!

Now, although in the past such attacks were considered rare, in recent years there has been an uncontrolled growth in the number of wild boar populations. Consequently, there have been some reported cases of wild hog attacks outdoors in the wild, though many of them involved hunters. However, just as you must know how to survive a bear attack or a wolf attack while hiking and adventuring in the great outdoors, so you should take to heart and mind this guide on how to survive a wild boar attack.

Statistics of the Feral Hog Population
you should know

In the study Wild Pig Attacks on Humans published in 2013, John J. Mayer of the Savannah River National Laboratory found that among the wild boar attacks reported, 70% of them occurred between 2000 and 2012, which is quite significant, to say the least.

Most of the attacks occurred in the Northern Hemisphere, about 88%, and the USA had the largest percentage of attacks, followed by India.

Overall, 15% of the boar attacks involved fatalities. The number of fatalities was twice as higher in the case of people that were traveling alone.

Places to Be Cautious About in Respect to Wild Boars

Moreover, as of late, they have also started raiding major European cities, looking for food in rubbish bins and jostling tourists. Among the cities affected is Barcelona, where wild boars emerge from Collserola Natural Park and make their way among people in the city. In any case, before you decide to go glamping in Europe’s finest resorts, talk to the locals about potential wild boar attacks, especially if you plan your trip in a mountain area.

Other affected cities include Berlin, Houston, Hong Kong and Rome. Perhaps this problem is also a direct result of the boar’s adaptability. They can thrive pretty much in any type of environment, from semi-arid plains to alpine forests.

Why Should You Avoid Wild Boar Encounters At All Costs?

Wild boars are very dangerous not only because of their aggression but also because they are the carriers of diseases that can be passed on to humans such as tuberculosis, hepatitis E and influenza A. The also cause thousands of accidents on the road each year that can result in serious injuries for drivers.

Below you’ll find some basic information on these animals. Before that, if you are new to hiking and outdoor adventures, check out our complete guide of hiking for beginners. Not even the most seasoned of adventurers know how to survive a wild boar attack, let alone young padawans. But let’s learn a few things about these wild hogs first! 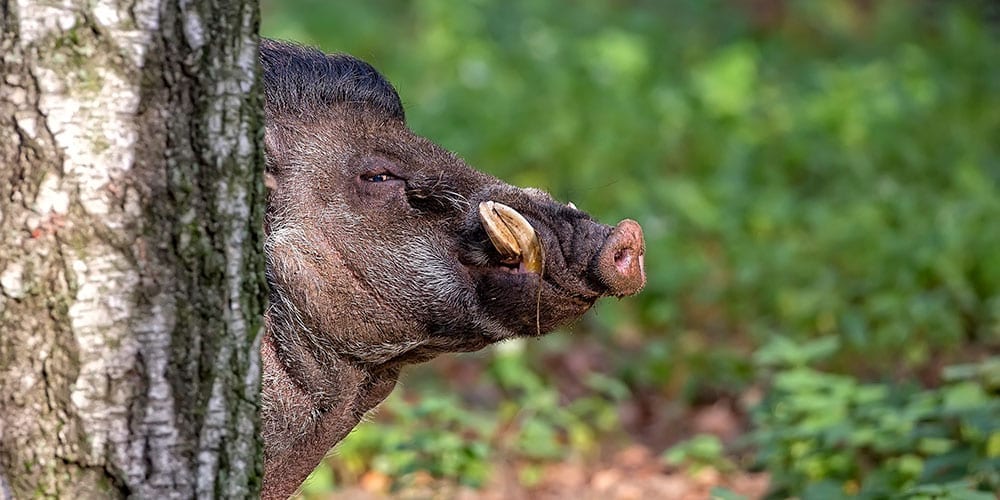 Native: Throughout Europe and Asia, introduced into parts of the US in the early 1900’s.

In Australia, Canada, Latin America, and the United States, wild boars have been hybridized in recent decades with feral pigs, and these hybrids have caused many issues. In other words, before you begin planning your hiking trip, make sure you know everything there is to know about hiking safety!

How Do Wild Boars Look?

Wild boars resemble domestic pigs in appearance, but they seem to be stronger and more long-legged than the latter.

The head of a wild boar is very big and takes up a third of its body. Now, we can easily understand that if such a creature attacks you, the last thing on your mind will be to measure its body, perform equations, or even count its legs. Surviving any animal attack while hiking can be a traumatic experience in and out of itself. Nevertheless, it is crucial to notice as many details as possible because the difference between “four-legged furry monster that yelps loudly” and “four-legged furry monster that growls” can be life or death.

Wild hogs have short coarse hairs. In terms of color, they have grey-brown fur. Piglets’ fur is ginger-brown with stripes for camouflage. Adult males have strong tusks that protrude from the mouth. 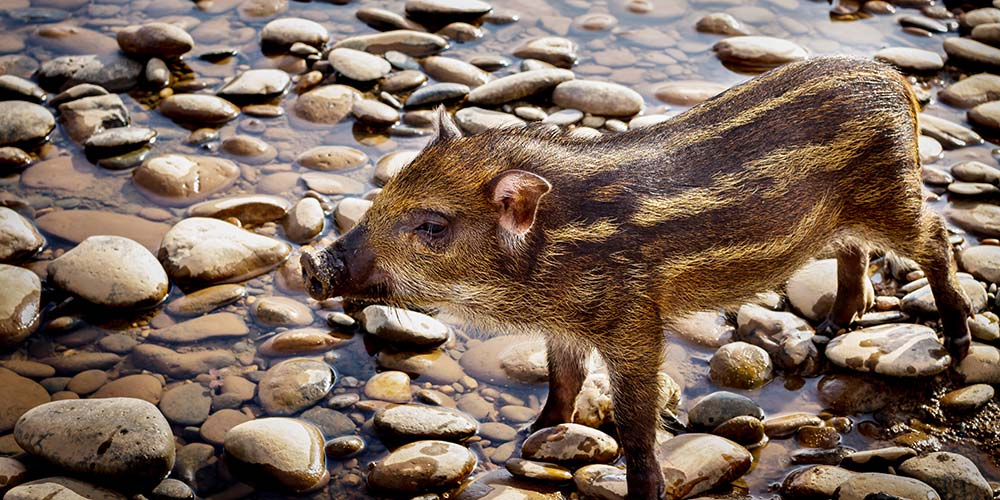 Wild boars can live up to 14 years in the wild. Most of them live in groups that are made up of females and their piglets. Adult males usually live on their own, only coming to the group to mate. They can reach speeds of up to 25 miles per hour. Not as speedy as a coyote for example, but fast enough to ruin all your hopes, dreams, and expectations related to that particular hiking day.

In terms of weight, males are usually 20-30% heavier than females. The size and weight of these animals really depend on the region and environment they live in. For instance, in Europe, the average for males is 165-220 pounds and 130-180 pounds for females. In Northeastern Asia males can weigh up to 600 pounds.

Wild boar diet
and what they eat

They are nocturnal animals. They search for food at night.

They are omnivores and their diet is comprised of nuts, seeds, roots, acorns, fruit, small reptiles, and rodents. Occasionally, they might eat small mammals and bird eggs.

Subspecies
of the wild board

Starting with 2005, a total of 16 species are recognized. These 16 subspecies can be divided into 4 regional groups as follows: Western, Indian, Eastern and Indonesian.

Wild boars and the damages
they cause

Because of their growing numbers, wild boars can have a negative impact on forest regeneration. This is mainly due to their habit of digging up soil while looking for food, which damages tree seedling survival and growth. The most vulnerable seem to be the longleaf pine seedlings.

Relationship with humans
and what they can result in

The number of boar population has increased throughout the years, but despite that, the species altogether is threatened by habitat loss. And that is because our fellow humans are at fault through all the deforestation that we are conducting and through the growth of settlements. Perhaps their increase in numbers correlated with the destruction of their habitat is what have triggered wild boars to invade cities.

When do they attack humans? 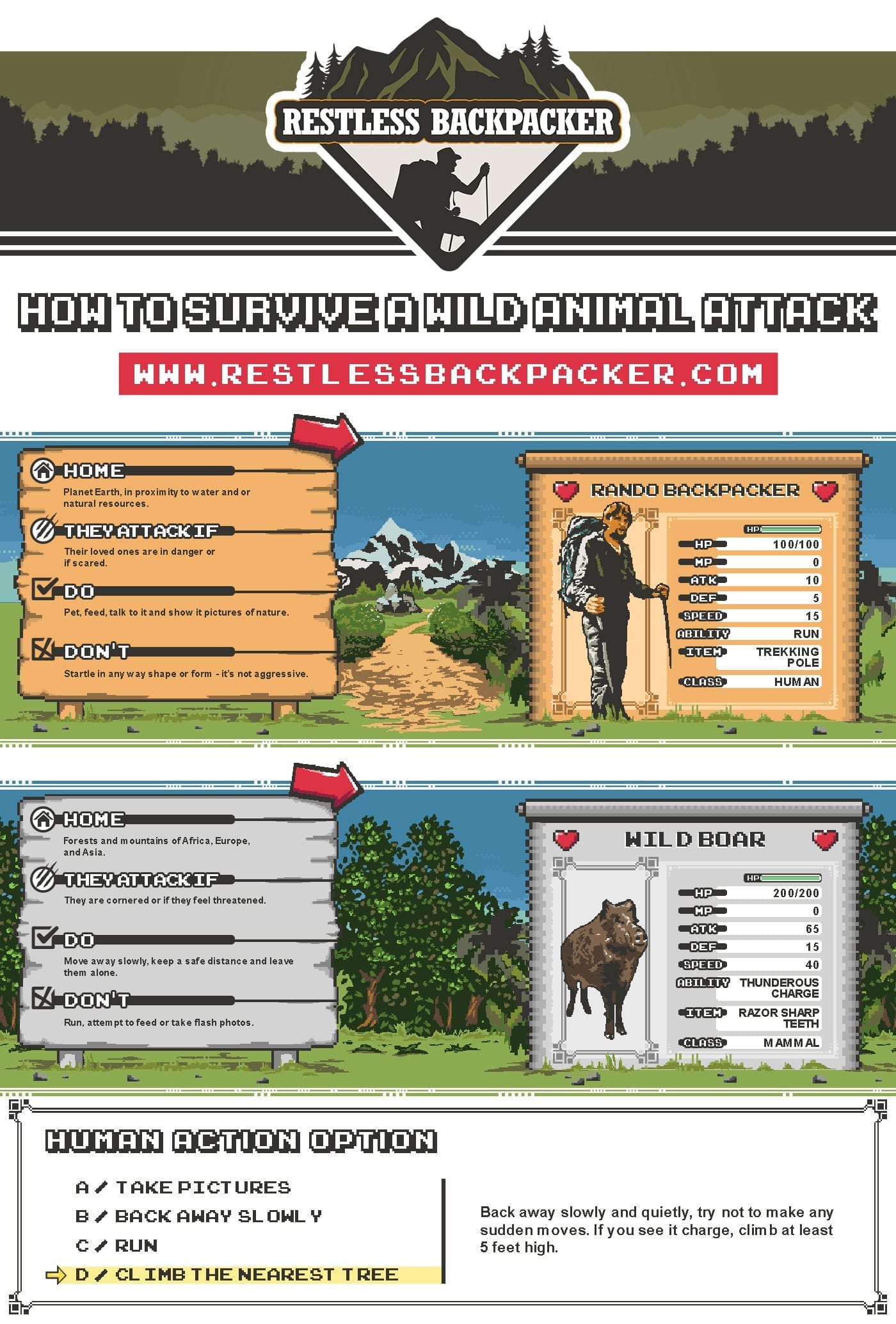 When wild boars attack, they usually charge and try to make their victim trip and fall to the ground. Because of their sharp tusks, humans can suffer injuries, especially in the lower part of the body. If after the initial attack the victim still shows movement, the wild boar will step back and then charge again.

How to Survive a Wild Boar Attack
And what to do

How to Prevent a Wild Boar Attack
And what to do

How to Survive a Wild Boar Attack: FAQs

Before we draw the conclusions on this survival guide, let’s answer some of the most frequently asked questions about wild hogs attacks!

1. Can you outrun a wild boar?

No. Even if you can score 40 miles per hour, which is quite unlikely, we do not recommend you run. The terrain is not in your favor, usually, and the boar will charge at you with incredible speed and fierce sharp tusks, waiting for you to trip and fall. Do not forget that a feral hog can reach between 25 and 30 mph. Moreover, they can jump over fences less than 3 feet high and even climb out of holes in the ground 5 or 6 feet deep. It is almost impossible to outrun a wild hog, especially since the “turf” is on its side, not yours.

2. How do you keep wild boars away from your camp site?

If you decided to camp in an area known for its wild hog population, the best way to keep them away is to build fences that are over 3 feet high. Make sure you bury the fence’s pillars and mesh deep in the ground so the boar does not charge at it and puts it to the ground. It is rare for feral hogs to attack camp sites without provocation, but if you intend to spend some time in the wilderness, come prepared with some heavy-duty steel hog mesh.

If you take your dog to accompany you through your hiking adventures or guard your camp site, you should take good care of each other. Wild hogs will not usually attack a well-behaved dog. However, in its mission to keep all dangers away from you, your dog could bark enough and stress the wild hogs enough so they could consider attacking. The razor sharp tusks of an agitated feral hog can do a lot of damage to animals and people alike. Moreover, wild hogs can transmit diseases (like pseudorabies) that can be lethal to your dog if contracted.

Honestly, wild boar encounters are the worst for hikers. And that is because boars are some the most unpredictable natural predators. However, if you take note of our guide, you should be safe and able to tell the story. Remember that if a wild hog attacks you, the best chance of survival is climbing a tree. Back away slowly and quietly at the first sign that the boar considers attacking. Look for high ground – the higher the better. If it starts charging at you, climb a tree or anything that is at least 5 feet high.