Surviving a Mountain Lion Attack: What you need to know
by Shawn Gossman
September 25, 2019

Mountain Lion Attack! This phrase has been mentioned here lately in the newscasts around the world, especially in the United States. It is no secret that a mountain lion attack can be a real thing.

Knowing how to survive a mountain lion attack is the absolute key to survival for the outdoors user and therefore, I’ve decided to create this article.

Mountain lions are scientifically known as Puma concolor and people often refer to them as puma, cougar, panther and of course, mountain lion.

In the United States, there are really only two types of confirmed mountain lion species. These are the North American Mountain Lion and the Florida Panther. 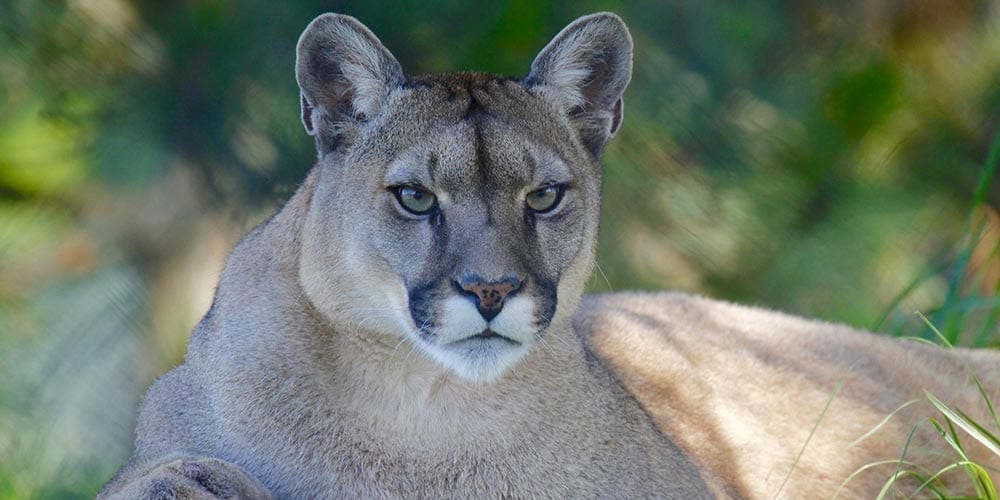 In some areas mountain lions are endangered while in other areas they are not. For example, the Florida Panther is a protected species.

It is said that the number of mountain lions in the United States unlikely exceeds 20,000 to 30,000 cats. That is because they are widely killed by human interaction whether by intentional control, hunting or vehicle incidents.

Mountain lions (males) will typically travel up to a couple thousand miles looking for territory to call their own. One will usually have a territory of 100 square miles.

These big cats are solitary animals and never travel in packs.

They are tan colored, much like the color of African lions.

They are known to be able to sprint run up to 50 miles per hour. Mountain lions can also leap up to 15-20 feet into a tree. Imagine a house cat but several times larger and way more powerful.

Mountain lions typically eat game animals such as deer, wild pig, and larger herbivores. They are unlikely to eat animals that could easily fight back such as coyotes, wolves, and bears.

They are mainly found to live west of the Mississippi River and in some states in the south where other larger carnivore animals are also located.

Mountain lions tend to hunt and travel from dusk until dawn, but they do not hibernate during the winter months.

Mountain lions leave behind tracks that are usually 2.75 to 3.75 inches in diameter, and round in shape with four toes. Typically, you cannot see the claws of the lion within their tracks.

They will sometimes scratch trees and rocks, leaving behind marks. This serves as a warning to other lions traveling through the area that another mountain lion is always occupying the territory.

The scat usually contains meat and bones of the animals they have been feeding on. When the mountain lions want to preserve or hide their food to eat it later, they will bury the remains under leaves and grass.

Additionally, an interesting fact to mention is that they hiss, growl and have a very loud yelp typically popularized on television and movies.

It is very rare to ever encounter a mountain lion. These animals are very solitaire and do not want to interact with humans. Therefore, if a mountain lion hears a human approaching, it will typically flee away to protect itself. 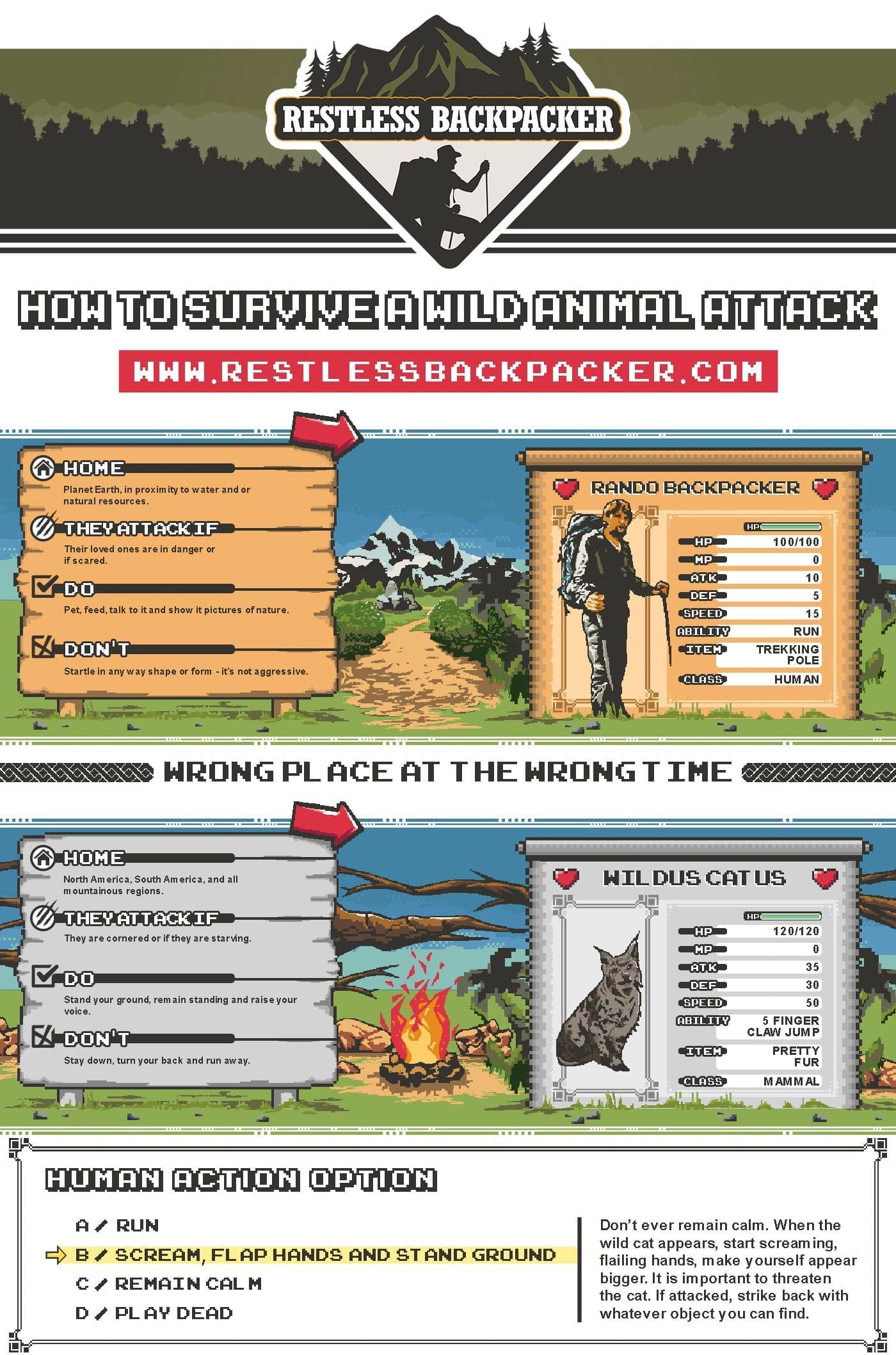 There are times, however, when humans and lions do come into contact with one another. When you encounter a mountain lion, you should always remain calm and try not to panic. It is advisable that you do the same with any other large and potentially dangerous wildlife.

What to do if
you encounter a mountain lion

Before hiking in an area where mountain lion encounters occur, you need to take proper safety measures. First of all, try to hike with another person or a group if possible. Also, always tell someone who is not going where you are headed in case you don’t come back when expected.

In addition, bring a bear bell with you to attach to yourself when hiking. In that way, mountain lions will hear you coming before you actually get to them. It’s better to alert the animal that you are near before making contact. It goes without saying that surprising a mountain lion will increase the chance of a negative interaction.

Above all, before considering the use of firearms in self-defense, consider the safety and chances of harming yourself or another person if you discharge the firearm improperly. Some states federally protect these animals. 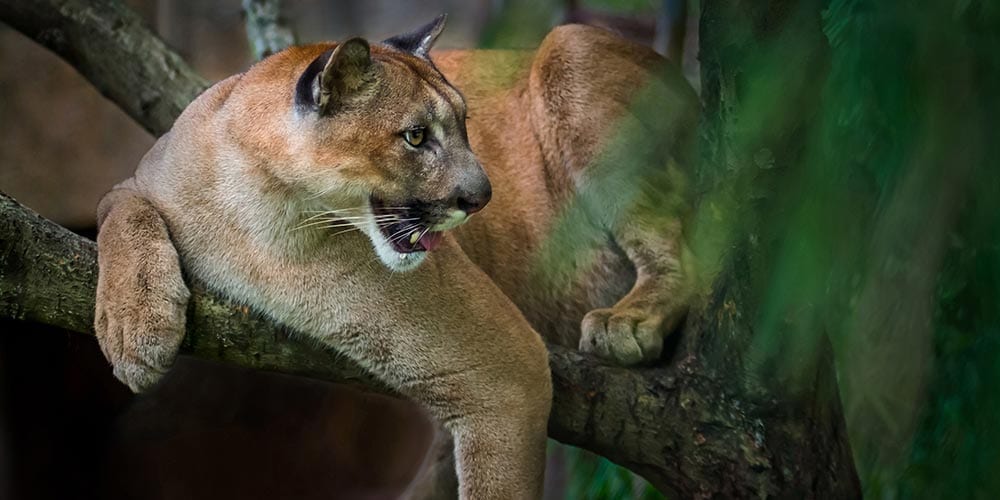 If you happen to encounter a mountain lion while hiking, the first thing you need to do is remain calm. The idea is to stand your ground and look larger than what you are. If you have a backpack, remove it slowly and raise it above your head to appear very large to the lion.

Also, scream, yell, stomp and even throw objects at the lion.

Then give the lion plenty of room for egress away from you.

Most importantly, don’t play dead and never run from the lion – like many members of the cat family, they enjoy victims that they can chase and pounce on. Mountain lions typically pounce on victims by digging their claws into them and biting around the neck in an attempt for a quick and clean snap of the neck bone. Running from them is a bad idea.

How to Survive
a mountain lion attack

If they attack, fight back, go for eyes, nose and ears as these parts are sensitive and will cause extreme pain for the cat if harmed. Humans that fight back have a much greater chance of survival than those who do not.

If you or another person are attacked by a mountain lion and are able to escape, it is critical to get the injured to medical professionals as soon as possible. Blood loss can lead to infection and even death in a matter of minutes to hours.

In mountain lion country, hikers should seriously consider carrying GPS-enabled emergency locator beacons. Bring a first aid kit with you and know how to use its contents before you hike.

The recent news stories have cried mountain lion attacks are happening all over the country. However, they are still very rare for humans.

The main meal choice of mountain lions typically includes deer and other animals that are likely to be struck by cars. I’ve hit 5 deer in my life and have never encountered a mountain lion. Vehicle deer collisions often result in major injuries and even deaths of drivers and passengers in the vehicles.

Mountain lions help control deer populations and these animals are just very special and interesting to begin with. I encourage you to educate yourself more on the mountain lion and learn about why they are important animals in nature.

For the most part, the chance of you being involved in a mountain lion attack is pretty rare. In fact, you are more likely to hit a deer with your vehicle or get bitten by a dog than you are to be attacked by one of these big cats.

Nonetheless, you should be prepared for an encounter and even an attack from these critters, especially if hiking or backpacking in areas where they are reported to be.

For more information on Mountain Lions and if interested in the conservation and protection of these beautiful animals, please visit The Cougar Network.

"The outdoors to me is the best medicine for stress and anxiety. " 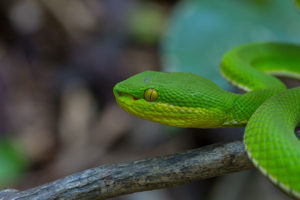 How to Avoid and Survive a Snake Attack 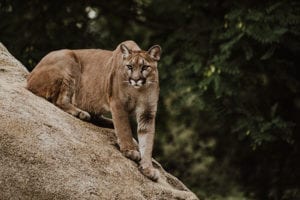 Surviving a Mountain Lion Attack: What you need to know 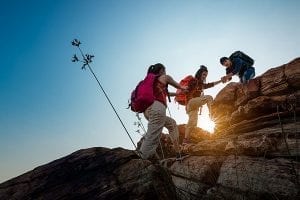 Trekking vs Hiking vs Camping – How to Tell the Difference