How to Survive a Bear Attack
by Lidia Bertesteanu
November 5, 2019
Some of you may never have considered it, while for others it is all you can think about when you’re in the woods, camping, hiking, etc. “What if I was attacked by a bear?”

The unfortunate truth is hunters kill far more bears than they should. Many forests worldwide continue to shrink every year, hindering the ecosystem’s ability to provide bears with what they need to survive. This problem leads to numerous bears wandering closer to human establishments in search of food.

Between 2000 and 2015 there were a total number of 664 bear attacks in the geographical regions brown bears live naturally: North America, Europe, Russia, Iran, and Turkey.

These majestic creatures usually attack to protect their cubs and their territory. Sadly, these attacks made conservational efforts more difficult, as resentment started to grow towards the large mammal species.

As a general direction, if you understand how to respect your environment and avoid a bear attack, you shouldn’t fear a not-so-friendly Baloo encounter during your hike.

In this article, we will learn about the main reasons bears attack, how to survive an attack, and, most importantly, how to avoid a bear encounter altogether. 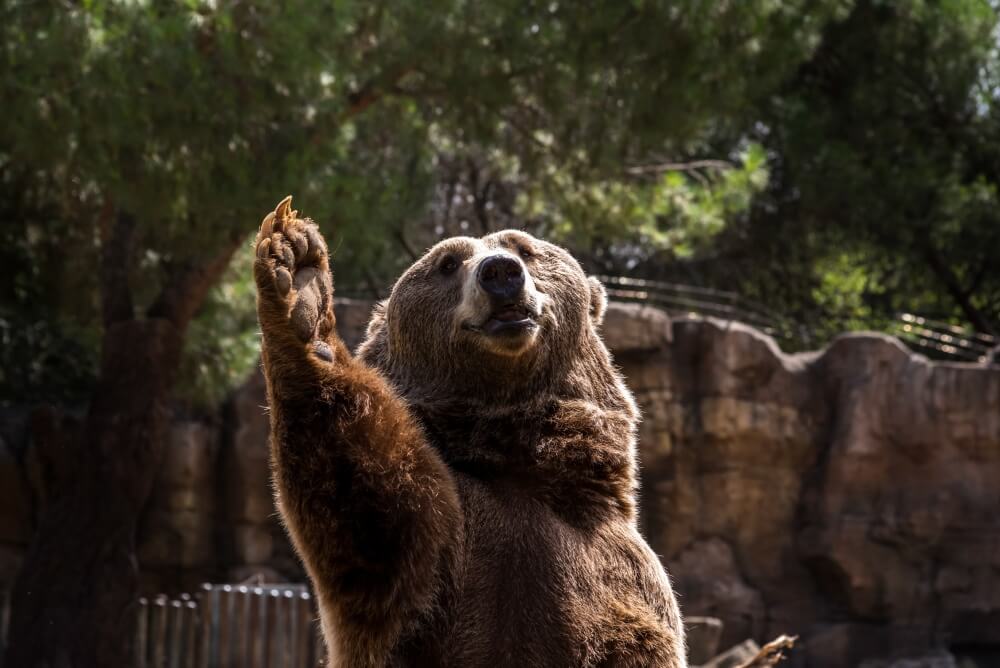 While the former is more common and usually avoidable, it is possible for backpackers who experience them to live and tell their tale. However, victims of predatory attacks are more often seriously injured or in a worst-case scenario, killed.

Knowing the difference between these two types of attacks can be a game-changer in a person’s ability to survive the unfortunate encounter.

It’s all in the name. A bear will attack if it feels like its cub(s), food, or territory is threatened. Bears can also adopt a defensive stance when they’ve been startled. They will give off important signals that their space is invaded when something is making them feel unsafe.

In this situation, the bear will lunge at you in order to scare you. This is known as a bluff charge, and it’s the best way for a bear to signal that it means business. If a person recognizes this behavior, it’s time to give the bear space and retreat.

Due to environmental changes, deforestation, over-hunting, etc, many bears are left without food. This pushes them further into populated territories, hunting for food scraps.

Realistically speaking, when a bear enters your camp, it wants to eat your food, not you. However, being pushed to this point of hunger makes them aggressive and fearless – a perfect recipe for disaster.

If you are involved in a predatory attack you will notice the bear is stalking you. This means it is seeing you as prey.

You can determine how likely the bear is to attack by observing the position of its ears. The more sloped back the ears are, the more the chance of an attack increases. Also, pay attention to the fur on the back of their necks. The hair will rise and they will start to growl as they get closer to actually attacking.

Your only chance to deter the bear is to make it feel threatened and scare it away. We will dive into specific and useful tips in the next sections of this article. 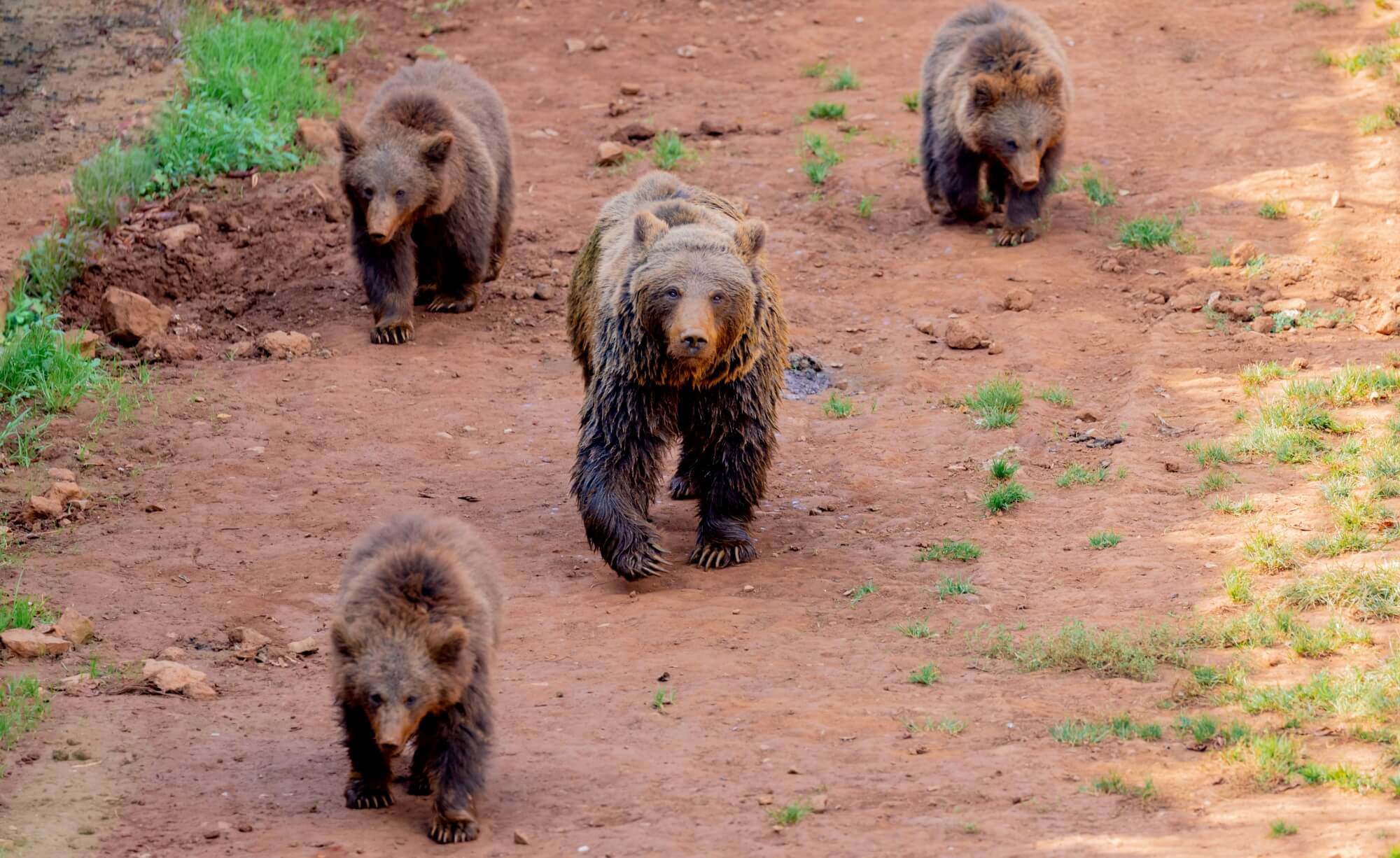 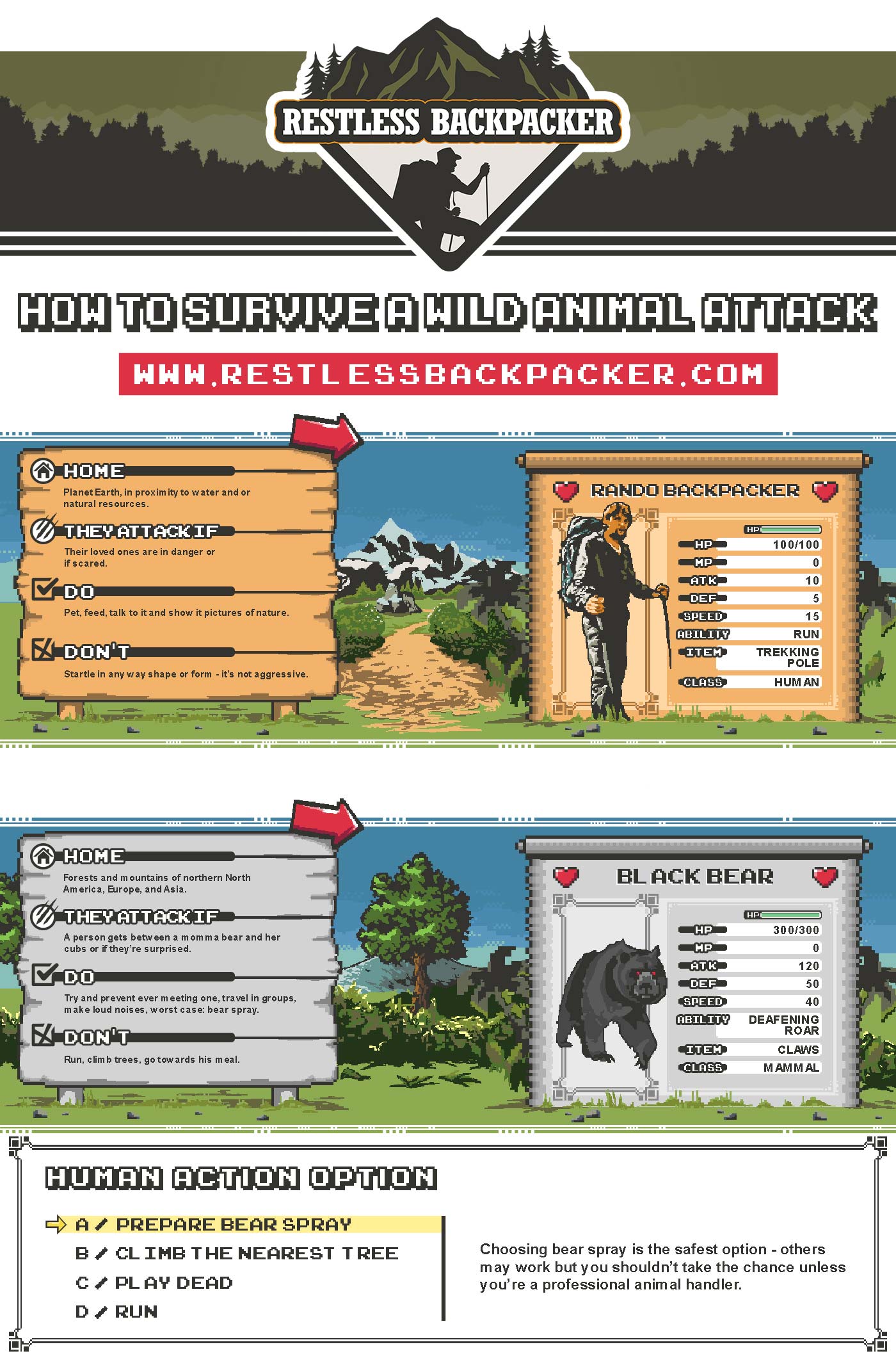 How to Survive a Brown Bear Attack
Key Points

Brown bears or grizzly bears are the most common bear species in the world. They can be found across Eurasia and North America. They are bigger and more aggressive than black bears.

Here are some key tips to help you be prepared and survive a brown bear attack:

Have bear spray on hand

When hiking in bear country, make sure to always carry bear spray. It’s an effective way to blind the bear for a few seconds, providing time to create a vital distance between you and them.

Bears are predators that can run 40 miles per hour. You cannot. As soon as you start to run, those predatory instincts are activated and the bear will pursue.

You need to stand your ground and make yourself appear as large as you can. Unless you encounter a male during mating season, the bear shouldn’t be competitive; it doesn’t want an actual fight. Using intimidation could scare the bear off.

Slowly back away, working at angles and using your environment to your advantage. E.g. weaving in and out of trees, bushes, etc, to create distance between you and the bear. Aggressive animals that look poised to attack can calm down and just walk away. There’s no conscious mechanism in their brain that has anything against you unless you were tampering with their cubs or you accidentally startled them.

From cartoon characters to magazine writers, this is one important rule everyone should know. Contrary to what you may have thought, bears can be excellent climbers. Getting yourself stuck up a tree with nowhere to go makes you a sitting duck. If there’s a big tree near you, use the tip above and work your way around it, hoping the bear calms down and just wanders off.

It sounds cliché, but many bear attacks occur because the animal is asserting dominance over you. Remember, it has no grudge against you per se. When the bear proves its point, it may move on. Most attacks aren’t brutal disasters that leave serious injuries; they’re just a quick wrestle until the bear feels unthreatened and leaves.

In the event that a bear seriously begins to bite and claw at you, you need to think quickly and identify any weaknesses. If you carry bear pepper spray, use it copiously, even if it hurts you! Eyes, ears, and throat are all weak spots that you should aim to attack.

Unfortunately, you will be in bad shape if the bear decides to press. There’s no getting around this. Then it becomes about survival. In order to live through it, you may have to sacrifice a few teeth marks and lacerations to injure the bear. It sounds horrible, but in this context, it is life or death. 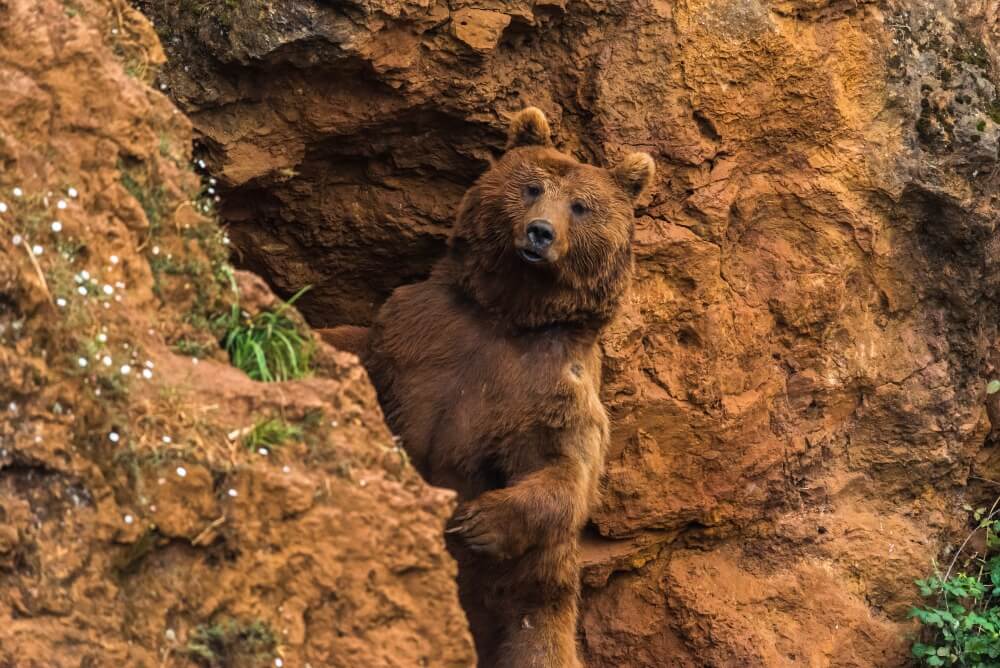 How to survive a black bear attack
Key Points

Black bears are the least aggressive bear type in Northern America, but that does not mean you are completely safe in the case of a potential attack. Black bears are smaller than grizzly bears and with the right information and a bit of courage, you will be able to stop their attack.

You need to show the black bear you are threatening. Make yourself larger and louder, use a stick, and wave your arms. If the bear is in a defensive mode of attack, this will be enough to make it leave you alone.

You will not escape the black bear this way. They are known to be excellent tree climbers and by doing attempting to out-climb a bear, you might put yourself in an even more dangerous situation that is now inescapable.

It is one of the most useful tools you can have with you when faced with a bear attack. It will not hurt the bear but will help create a useful pepper spray barrier between you and it, which increases your chances of escaping substantially.

When it comes to black bears, it is always better to defend yourself than to lie down on the ground. Make noise, and make yourself look larger if the situation escalates and the bear is closer to you now. Use any nearby object as a weapon. In a desperate situation, you can even kick the bear. Focus on the sensitive areas and try to force it to run away. 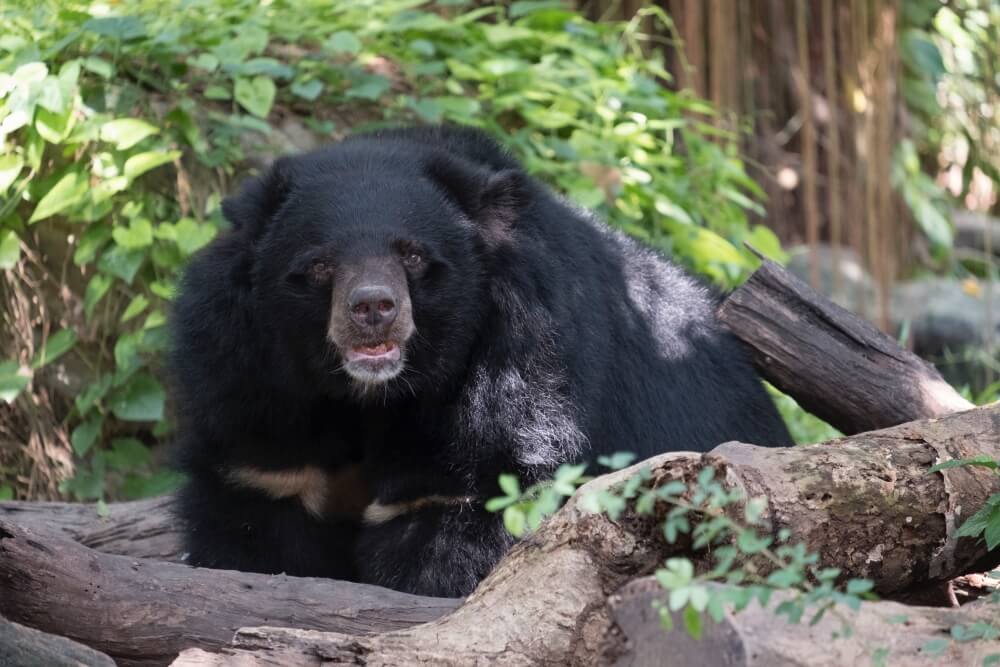 Tips to Help You Avoid the Encounter
And stay safe

Let’s face facts here: nobody ever wants to have to use these tips. Outside of the zoo, most people don’t even want to experience a bear encounter, let alone a bear attack. So here are some things that you should do to ensure that you’re avoiding the bear altogether:

The worst scenario can happen. You want to avoid it, but the bear may still attack. If you want to be prepared for this, here are some things you can do:

All types of bears have the potential to attack. Brown bears and black bears are what you will be dealing with if you’re in North America. So knowing how to survive a brown bear attack can be useful.

Generally speaking, these bears do not bother others in the wild. They will try to avoid you; you should return the courtesy.

Sometimes a bear attack is unavoidable. Around 30 people per year can attest to that. And while 30 per year isn’t much at all, just imagine being one of them! This is why you always need to be ready for the worst, while working to avoid the encounter altogether.
Make sure you check us out for a lot more useful information that might just save your life. 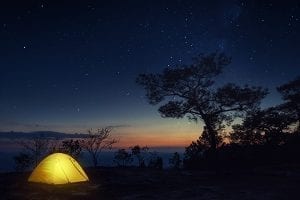 We Gathered Creepy Backpacking Stories Around the World – Which Is Your Favorite? 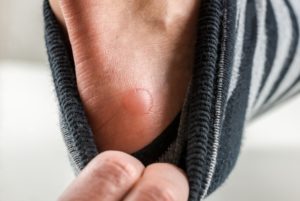